You are using an outdated browser. Please upgrade your browser to improve your experience.

Business ombudsman: Ukraine catches corrupted people, but does not bring cases to the end 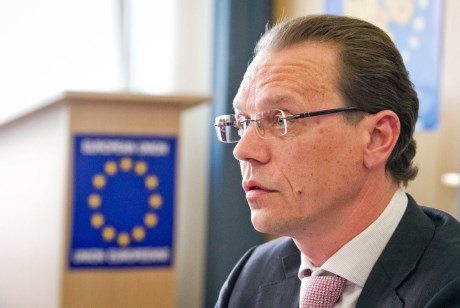 Algirdas, you often have opportunity to discuss situation in Ukraine with the representatives of large companies. What is their biggest fear, what prevent them from working in our country?
Yes, I often meet with managers. We hold many meetings with business persons, with business leaders, both in Kyiv and in the regions on specific issues. If we take the overall assessment, we must say that, despite the problems, the business climate in Ukraine is gradually improving. This is confirmed by the European Business Association: according to its research, 86% of the respondents (companies, - Ed.) said they intend to increase production in 2018, while in 2016 only 56% of them were intending to increase production. And this is optimistic. And speaking about what stops the investors: there is a set of reasons.
Undoubtedly, it is very unusual for foreign investors that law enforcement bodies often interfere in business. Somewhere in Sweden or Finland, special forces simply do not come to the business office. In Ukraine this is a common practice. And this is one of the main obstacles for foreign investors. At a recent meeting between the president and the prime minister with business, serious emphasis was placed on improving the interaction of business and law enforcement agencies.
So, together with the Prosecutor General's Office, we have started working on specific documents. If they are approved, the law enforcers will be banned from using balaclavas and weapons during the searches. In addition, if the investigators have a sanction for obtaining any documents, they will be obliged to ask to voluntarily surrender them. We often hear from representatives of foreign business that the law enforcers in balaclavas, with machine guns, seized documents with sacks. The inventory of documents was not made, as required by law. All these things, to put it mildly, are unusual for foreign investors.

Is abuse of authority by the law enforcers the only factor that is negatively affecting Ukrainian business climate?
I can also add the actions of regulatory bodies that do not adhere to established procedures. Of course, the laws on reforming the supervisory bodies have been adopted, but it does not go as smoothly.
Of course, the reform of the civil service is very urgent. From my point of view, in Ukraine this reform is too slow. Still, in the West, people are used to the fact that the civil service work for business and society instead of ruling them.

From the point of view of regulatory regulation, has doing business in Ukraine become easier?
Yes. Now the procedure for registering business is easier than it used to be before the Revolution of Dignity. Now it is easy to do it, literally in a day or two. The number of permits and licenses restricting the ability to conduct business has decreased twice. This is also a positive moment. There are positive changes in the sphere of public procurement: business can now safely participate in tenders. Many businessmen say if you offer a good price, you can win a tender. there are some improvements, but this is not enough to attract the flow of investment in the country.

Cabinet stated that Ukraine can enter the TOP-40 rating of Doing Business. In your opinion, is this really possible?
It's hard to predict and I probably would not do it. It is good that such a goal is set. The Doing Business rating has specific indicators that need to be achieved, and for some of them, Ukraine is still very far from the goal. In particular, this is low speed and high cost of connecting to electricity, rights of creditors are unprotected, taxation is not liberalized. In addition, the race in this ranking is not so simple, it should be taken into account: other countries also do not stand still.

Compare the situation with raiding in Europe and Ukraine, please.
To be frank, I have not ever heard of raiders’ attacks in the European Union.

You want to say that there are no raids in the EU?
In the EU, there are cases of unfriendly interception of companies. But this is done within the law. If the shareholders of the company do not want to sell their shares, then there is an absolutely legal tool that allows you to buy shares even with resistance. Usually everything happens in the vein of hostile takeover, but it is absolutely legitimately. In Ukraine, we see complete violation of the legislation: from the forging of documents, forged decisions of shareholders' meetings.
How do you see the problem of corruption in Ukraine? Is everything that terrible, as international organizations often say about this?
Here, I think, you cannot speak that it is “black or white.” Until recently, corruption was synonymous with state policy, if we talk about the problem of Yanukovych... Corruption was vertical. Bureaucrats are used to think that if you have the right to sign, that is, this is the right to take bribes. Of course, there have been positive developments: in a very short time, the most up-to-date legislation was adopted in the field of fighting corruption, and new institutions were created. Every day we witness that the new institutions are doing their job: they catch corrupted people. But they do not bring the cases to the end.

Do companies often complain about corruption?
Speaking about corruption, such complaints are not numerous, because corruption needs to be proved by facts. Often complaints indirectly indicate on the manifestation of corruption, but there have also been cases when there were direct charges of corruption. We transferred several cases to National Anti-Corruption Bureau (NABU).
Recently, we often hear statements that the bottom line of the Ukrainian economy has already been passed. And there are real improvements: GDP is growing. Is it true?
The figures speak for themselves. Two years in a row we have actually observed a significant drop in the economy, but starting from 2016 we see the growth of GDP, the volume of industrial output, the growth of trade in almost all spheres. Of course, this is positive, but it is not enough for Ukraine to increase its GDP by 2-3% per year. If Ukraine wants come close to the neighboring countries, it should increase GDP by 6-7% for many years in a row. Then we will be able to quickly see the changes in people's lives. 2-3% are definitely not enough. Even Lithuania, my country, is growing faster, while the GDP per capita in Lithuania is several times higher than in Ukraine. And the gap is increasing every year. And of course, that is why it is very important for Ukraine to attract foreign investors. And for this you need to create a good investment climate. Special attention should be given to the hunt for foreign investors. Those who are responsible for these issues should understand that Ukraine is not the only country in the world that needs investments. The competition for investment around the world is huge. We need to make considerable efforts to make investments in the country. This will give a tremendous boost to economic growth.

Until 2014, Ukraine did not have business ombudsman, right?
Yes, it did not exist. If we talk about the idea of creating such an organization, it emerged during the presidency of Viktor Yanukovych. Then the EBRD together with the OECD and the Basel Institute for Combating Corruption put forward the idea that such an institution is necessary in Ukraine. After all, the EBRD is the largest investor in Ukraine and many enterprises, to which they had invested at that time, had problems with state bodies, with large-scale corruption. Then proposals were prepared for the establishment of the institution of the business ombudsman, but at the last moment, Mr. Yanukovych refused to approve his creation. Then, after the Maidan, such an agreement was reached with the new government (Arseniy Yatsenyuk - Ed.). And in May 2014 a memorandum on anti-corruption was signed by the EBRD, OECD, the government, and five business associations. It was this document that provided for the establishment of the institution of the business ombudsman. At that time, I worked in the European Commission (EC) as the EU Commissioner for Taxation and Customs Union, Audit and Anti-Fraud, but my cadence ended in 2014. And as soon as I returned home, I received a call from the EBRD with a proposal to take up this work, as we paid a lot of time to Ukraine in the European Commission. I supported everything that happened on the Maidan, and I really wanted Ukraine to change for the better. When I realized that my work in the country will not be connected with consultations, but I will do a very concrete work to protect business, I agreed to accept this proposal. In December 2014, I was appointed business ombudsman in Ukraine.

Who finances the office of the business ombudsman in Ukraine?
We are funded by international donors through an account managed by the EBRD. Our international donors are eight EU countries: Sweden, Denmark, Holland, Finland, Poland, Germany, France, and Italy. The funding is also provided by the EBRD member countries - the USA, Japan, and Switzerland. There is funding from the whole EU. But according to the plan it is stipulated that in some time, financing should go to the Ukrainian side, since we are a Ukrainian organization, we protect the interests of Ukrainian business. Negotiations are ongoing both with the government and with business associations on their gradual inclusion in financing. Some associations have already confirmed their willingness to be engaged in financing, and the EBRD is now developing a model, as it can be done.

Read the original text at: http://bit.ly/2JlqRlG